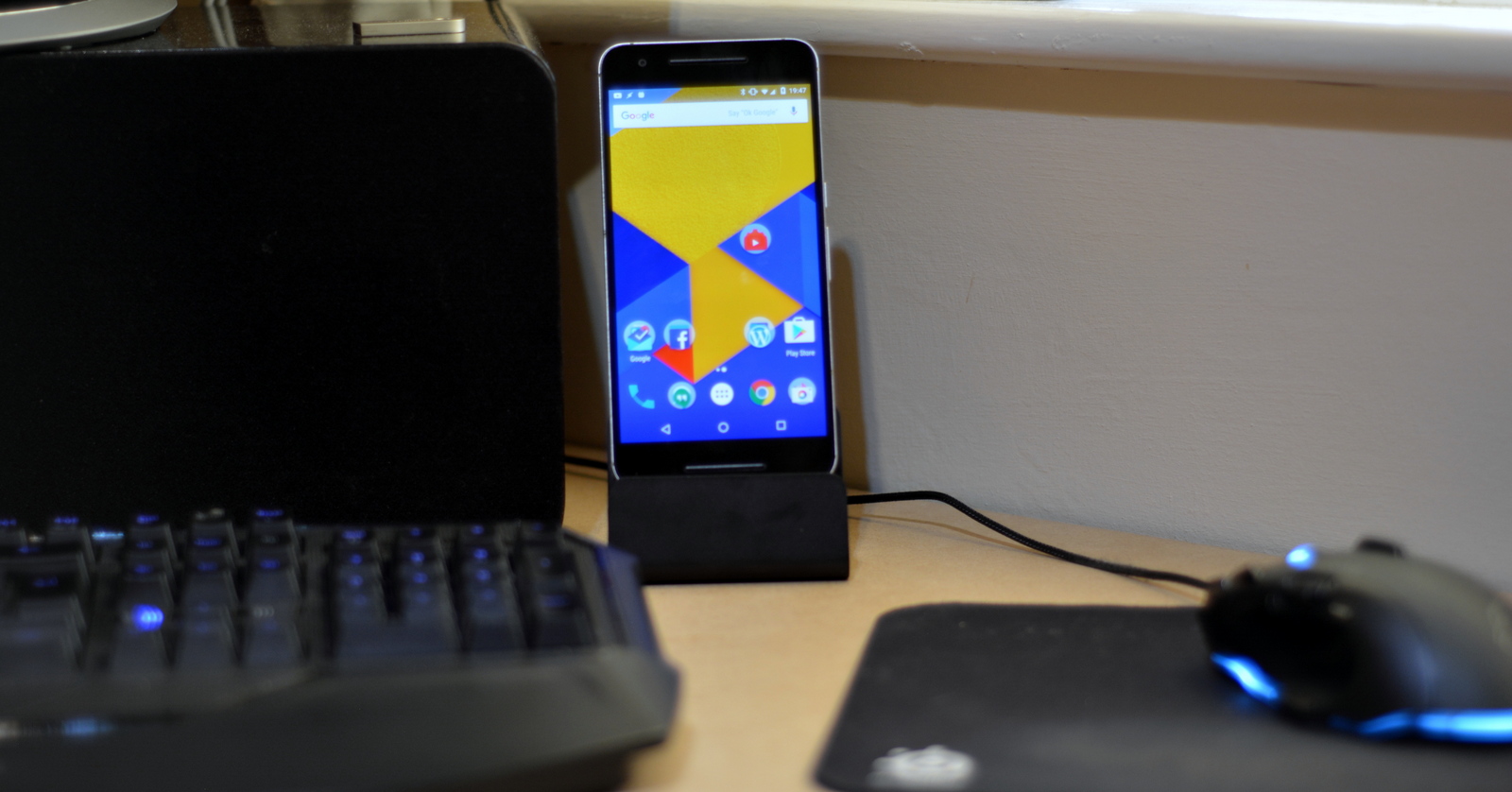 Stand down, it's just a stand

Recently you may have seen my office desk build log article, where I attempt to organise the working space and declutter it from all the cables (and useless crap that stays there) that run wildly on my desk’s surface. Building a custom desk alone won’t fix the cable management issues. I had to look at how I utilise my space and how I can get rid of more cables. I came to the conclusion that I need a phone dock again. I had one previously, however it wasn’t compatible with the Nexus 6P. I’m fully aware that docs are connected with a cable, but with some clever engineering, I was going to fix that!

In this review, I will show you why this one got my attention, and whether it was cash well spent! My aim was to get a compatible dock capable of charging and data transfer. In addition to this, I wanted to have enough space to accommodate my 2 cases and built-in such a way, that I could hide a cable. At the time of the purchase, the Nexus 6P desk cradle was priced at £9.99 and this was a fair price to pay.

The Nexus 6P desk cradle is made of decent plastic, should survive most damage you can expose it to in an average office. It should not chip or scratch easily. USB-C mount is placed in-between two spring-loaded raisers, that would act as extra support if your phone case needs it. The connector is placed on a flexible pillar that will change the angle of the connector depending on the depth of the phone or case being used with it. This should easily accommodate most of the cases without putting extra stress on the USB socket itself.

Another important for me feature was a detachable cable. USB extension connects to the dock via microUSB cable, and it is slotted underneath the stand. The connection is invisible and looks good even with a cable sticking out. Why was I interested in a detachable cable?  I’d like to route the cable through the desk, to hide the USB cable completely. Something that isn’t possible on many other docks due to cable placement or plug used. MicroUSB allowed me to drill a much smaller hole in the desk to get the cable through. Thanks to this, no cable will be visible.

The extension cable supplied is 1m long and can be easily swapped for a longer one if needed (or shorter one for that matter). This isn’t the USB-C compatible accessory, but for the most of the tasks, I’m ok with USB 2.0 interface. It would be nice to see this being fully ported to the USB-C.

It is easy to plug the phone in, but removal requires 2 hands. The Nexus 6P desk cradle is too light to allow the single-hand operation, while the phone is plugged in – you have easy access to the screen and all the buttons. Nothing is obstructed by the stand, however, the back support could be slightly higher to prevent the dock from wobbling when the screen is touched a little harder.

Amazon lists no QC compatibility or special charging features, therefore you should expect fairly standard charging times. You can connect the dock to the PC or a mobile charger, and your mobile will charge at 1400mA on average.

Data transfer is to also standard and my real-life test with 1.03GB zip file was completed in about 40sec. This is comparable with other cables I have, (I get about 36sec via USB 3.0 ) and I think this is to be expected.

In a nutshell, I’m happy. Looking at Amazon reviews my conclusions are fairly similar to other users:

While not totally misleading – description should mention that this is USB 2.0  device, however, anyone who knows a bit about their gadgets will know what they are getting into.  Especially at that price range!

As I mentioned before, the dock could use with some metal weights inside, or being screwed into the desk. I mostly use Vysor to project the android screen on my PC, therefore I’m not that bothered. Unplugging is annoying, though.

The Nexus 6P desk cradle could use a bigger back and a heavier base. Some users report a difficult access to the front fingerprint reader, but this is why we have smart locks for guys! The best upgrade to this device would be routing a USB-C through the dock instead of microUSB  to USB-C. This would retain the USB-C compatibility throughout, providing USB-C cable is used to connect the cable to the PC or a charger.

Some people will still moan though… Take my advice, always read negative reviews, Nexus 5 does not support Quick Charge.

Although at £9.99 I’m not expecting miracles and dock accepting the USB 2.0 connectivity before purchase, I remain bit salty about the dock stability. USB-C equipped phones are usually flagship models with bigger screens, and this should be addressed. I might be tempted to mod the stand to add the USB-C support and either throw in some weight or bolt this thing down. I’m happy with the cable management of this dock, and it there is one less cable flying around my desk!

0
MiniWare has released the new portable soldering iron MiniWare TS101 and now you don't have to pick between DC barrel jack and USB-C - you can have both! This and more about their latest product in my review.
Recently you may have seen my office desk build log article, where I attempt to organise the working space and declutter it from all the cables (and useless crap that stays there) that run wildly on my desk's surface. Building a custom desk alone...Nexus 6P Type-C desk cradle stand - one less wire around