The news is out! Raspberry Pi 4 runs hot! The internet is filled with thermal images of board glowing yellow and red and 3rd party manufacturers are in the race to provide the best custom cooling solution for your money. What if you would like to get something more than just a fan blowing over the CPU? You could take a look at 52pi Power Board.

52pi offers a series of cross-compatible hats that you can put on your Raspberry Pi devices. I got my hands on the on a couple of them, so in each video, I will see what the boards are made of:

The 52pi Power Board (EP-0104) comes with the following features 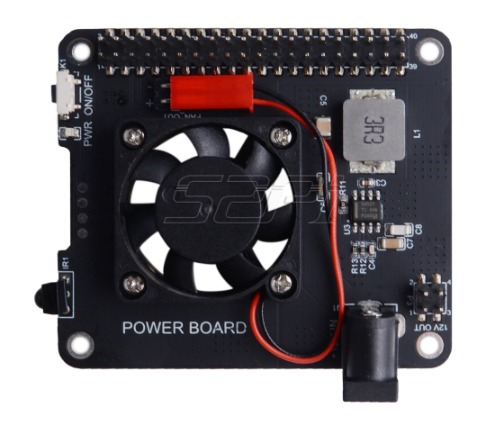 Before I will jump any further, I’m sad to say that the 12 V DC jack never worked properly. I took the board to Teeside Hackspace where Tom (big thanks for looking at it) first declared the TPS54527 voltage regulator dead.

I’m not too sure what killed it, but the board worked ok powered via GPIO, minus the 12V header for stacking. After 3 weeks of waiting, I received a bunch of TPS54527 and Tom yet again did a splendid job swapping the components. The board worked in the Hackspace test, but as soon as I connected it to the Raspberry Pi 4 via 12V regulated power supply with a correct polarity of the DC jack – it was dead!

Instructions don’t say anything against feeding the board from the Raspberry Pi (not at the same time), so I’m not sure what caused the problem. Since the rest of the board (fan, IR, remote, button and GPIOs) works ok, I decided to at least check cooling properties of the board.

EDIT: 28 Oct 2019: 52pi reached out to me and shipped a working board. They have been kind enough also to send me 3 power regulators IC so I could attempt the repair of the other powerboard. I bumped the review score with a customer care of 5 to reflect that.

NodeRED to the rescue! There is no better way to show hot Raspberry Pi 4 runs other than using a fancy dial and a chart to go with. Using the following nodes from the palette manager:

I created a CPU Dashboard (download at the bottom) to show me the temperatures and the use of the cores. I will be testing 3 cooling scenarios:

Each configuration shows idle and the cpuburn.a53 stress test.

Since the Raspbian update, the Raspberry Pi 4, while runs hot at idle (about 50°C) is capable of actually running at 80-82°C without thermal throttling. Pushing the Raspberry pi in excess of this temperature causes the 4 cores 1.5 GHz of the ARM Cortex-A72 to throttle, but only for a couple of seconds.

That’s a significant improvement, as the Raspberry Pi 4 is not throttling so aggressively any more.

Adding a self-adhesive mini heatsink doesn’t help much when the Raspberry Pi 4 runs at idle. It barely lowers the temperature of the CPU. The clear benefit of the increased surface shows up once the Raspberry Pi 4 nears the 80°C.

This mini heatsink was enough to keep the Raspberry Pi 4 from thermal throttling, however, did very little to actually bring the temperature down. You may get away with it if you don’t run the Raspberry Pi 4 at max clock speeds for prolonged periods of time. Running CPU in their 80°C is not advisable.

Finally, let’s see what active cooler can do. Comparing to some massive coolers out there, the 30mm fan of the 52pi Power Board looks puny, and it doesn’t inspire the confidence.

I was able to keep the Raspberry Pi 4 at 32-35°C at idle (room temperature 22°C) with the fan spinning quietly. There is no RPM control or dynamic ON|OFF function, but that’s fine.

Impressive. It looks like you don’t need a massive cooling tower to keep your Raspberry Pi 4 at reasonable temperature levels even at full speeds!

Pushing the CPU through the benchmark, the cores never throttled back as the temperature settled at around 50°C. That’s 30°C lower during the benchmark and about 15°C at idle.

The 52pi Power Board would be an interesting choice if not for the issues. I usually have more luck with stuff, perhaps I got a bad unit for the review. Personally, I don’t actually need the 12V supply, and I’m sure I can find the use for the remote shutdown. If anything, the experiment with the 52pi Power Board shows, that you don’t need a fancy cooler (although they look cool) to keep your Raspberry Pi chilled.

I still have some components left, I might bother Tom again to raise the board from the dead. Until then, I will leave it to your consideration. If you think I was unlucky – this is a capable cooler. Otherwise, I’m sure you can find an alternative HAT – the improved version below. 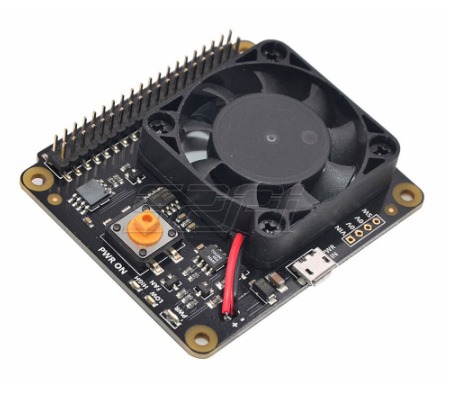 If you have any questions, let me know in this Reddit thread. As per NodeRED flow, you can download it from here.

Alexa, wake up my computer (Tasker too!)

March 16, 2018
I embarked on a mission to test every possible network interface, to create an updated version of a Raspberry Pi Network Test guide from...

April 10, 2017
ESP8266 is the most popular connected microcontroller out there. If you want to take advantage of it, you need to flash a...

September 9, 2017
From the previous write up we know I can use Tasker and NodeRED together. I want to have a very efficient and easy way...

Everything you need to start using JSON

June 10, 2018
Before you read any further, this is a guide that aims to ease you into the JSON data structure. It's written for the purpose...
Load more
Facebook Instagram Mail Paypal Twitter Youtube
© 2018 NotEnoughTech. All rights reserved