Raspberry Pi Getting started with RPI

Since the Raspberry Pi Jessie update, my older guide on networking became outdated. This Raspberry PI static IP guide should explain the changes and allow you to set the raspberry pi again within your network. While this guide is valid on its own, I would recommend you to read the 4 step setup guide: How to connect RPI to a PC. It will take you only extra 5 min, and you won’t be confused about my IP number choices in the Ethernet setup.

First of all, there is no need to modify the interfaces.d file anymore. The config should be OK for the majority of the cases. There are other files responsible for the Ethernet and WIFI set up. If you already played with this file and you wish to restore it to the default config please use this configuration:

WIFI config from a Terminal 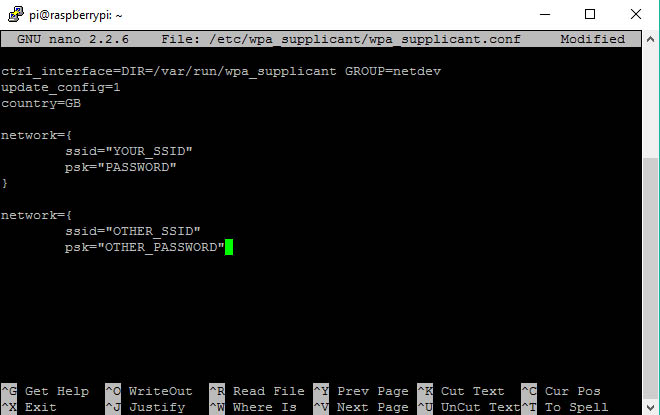 You no longer have to modify the interfaces.d file to connect to the WIFI. The config for this is included in the file:

The setup is fairly straightforward, copy the file details below and fill in the SSID and PASSWORD with the relevant details (keep “” symbols). Save the file and reboot your RPI if the changes have not been applied automatically. Multiple SSIDs can be added in a similar fashion. The template below contains 2 entries. Each one is responsible for a different SSID.

Static IP can be assigned to both interfaces eth0 (ethernet) and wlan0 (WIFI), you can benefit from having a fixed IP for each interface. This will make it easier to forward the ports and find your device on the network. Find the interface names using:

Bear in mind that interface names have changed since Raspbian Stretch and to get the old names back again you have to follow the steps from this guide. Both interfaces can be configured in the same file. Navigate to:

and edit the files accordingly. If you want to assign the static IP to both interfaces just type one interface after another. 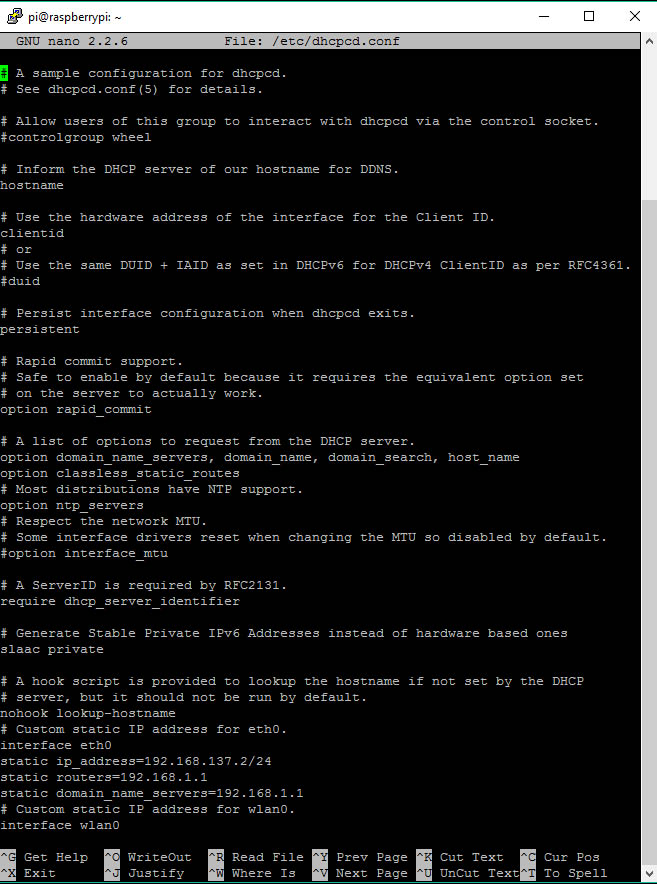 For this example, I will be using my preconfigured PC (see the guide), if you are using a router, just use the router’s respective values. Otherwise, make sure your PC’s IPv4 is also configured in a similar way.

To check what IP addresses you have linked to each interface use:

The static ip_address should be the same one you have used in the previous guide. This is the IP of your Raspberry PI. The 192.168.137.255 is the IP of the PC which acts as a router.

In the similar fashion static IP is assigned to the WIFI connection.

In both cases, it is recommended that you reserve the chosen IP on your router (or manually assign it to the PC if you are connecting to one instead) to preventing other devices highjacking the lease when the device is offline.
Log in to your router, go to the DHCP settings and reserve the IP of the RPI for the WIFI and wired connections. If you’ve followed the 4 step guide, you may now delete the IP value from the cmdline.txt on the SD card.

And you can start playing with services that require your Raspberry to have a static IP address.

February 16, 2017
Since the Raspberry Pi Jessie update, my older guide on networking became outdated. This Raspberry PI static IP guide should explain the changes and...

Raspberry Pi NAS: (NAS-pi) The Glue of The Universe #part6

September 29, 2017
For the first time, I was able to lift the box up without any pieces falling to the ground. That's right guys, it's glue...

Connecting to Raspberry PI for the first time!

July 26, 2016
Connecting to Raspberry Pi from a  PC can be done in a few minutes. You don't need an extra mouse or keyboard. It is possible to...
Load more
Facebook Instagram Mail Paypal Twitter Youtube
© 2018 NotEnoughTech. All rights reserved