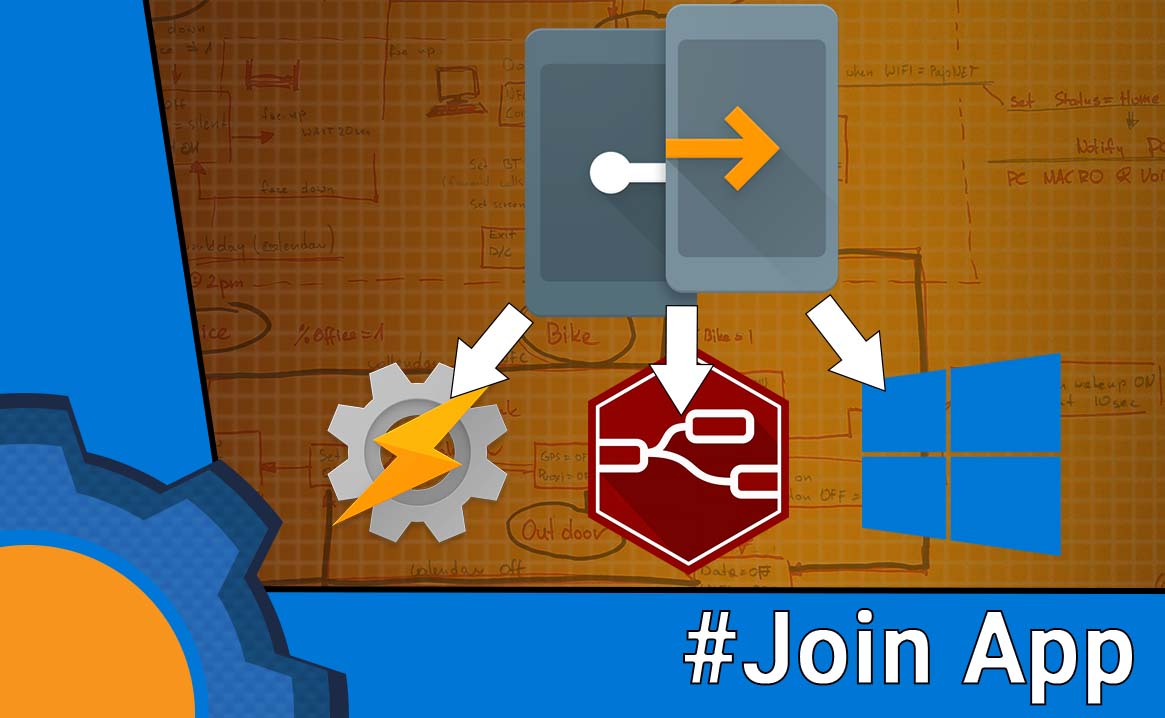 Make use of Join custom commands

Become the Commander of Join!

Join App by Joao Dias adds new features each week, it’s hard to catch up sometimes. While the big deal for me was the NodeRED support, there has been a new feature added recently that got missed in the process. Join custom commands now are available and can be used for virtually anything. I’d like to highlight it, and show you how Join custom commands could be used.

If you open Join’s settings, you will see the new tab, where the commands can be set. It’s pretty straightforward if you used the AutoApps command system before. If not – here is a quick reminder:

The command directs the Join custom command to the correct source (not the device). It could be a Tasker’s profile, a flow in NodeRED or EventGhost macro.

Params are where you pass the parameters or data you wish you send for further processing.

There are few options to modify:

Note that you can actually push the Join Command to all devices, but the command would only work on the devices which respond to the correct command word. It’s worth noting that Join Custom Commands are stored locally right now and there is no synchronization between different devices yet. (I have asked for this to be a feature).

The prompt text lets you add additional information to your command. The command remains the same but the new data is appended to the predefined command:

Now that we have some Join Custom Commands – let’s see how they work.

I’m going to show you X use cases, I hope this will illustrate how powerful the Join Custom Commands can be.

I have used NodeRED to perform an internet speed test. The truth is this could be called from any device, not only smart speakers. Adding the Join Receive Message and Join Push, I can request the speed test and return the results to the same device by reading the sender ID.

Regardless of the device used, the information always goes back to the sender.

It’s easy to pick a warm bed over getting up to turn the PC off or put it to sleep. I have several devices that can do it. I will use this scenario to show you how to connect Join Custom Commands (Actions in Join app) with EventGhost (EG is like Tasker for PC).

The command I’m going to use is:

This is going to be sent to my PC (but you can send it to multiple computers). To connect the EventGhost to a PC, you have to open up Join settings on the target PC and set the port. AutoRemote plugin for EventGhost will be also listening on the same port. Follow these instructions to add the plugin.

On my PC, EventGhost will wait for the command and will put the computer to sleep – with the Sleep action. It’s a good idea to display a short warning and delay the process few seconds.

Being a more public person than your usual Joe comes with a risk. The world is full of nutcases that sooner or later try to upset your life. Google Authenticator increases the security of my accounts, at the cost of making it frustrating to log in. João Dias has given me a great solution to this. Opening GA on a smartwatch makes it easier to get the authentication code.  I don’t have to look for my mobile, unlock it then open the app.

Opening apps on the smartwatch is annoying, to say the least, and you can do so by sending this command:

I don’t even have to release my hands from the keyboard/mouse to get the info I need. Once the command is sent, Tasker will take care of the rest.

To open the Authenticator app all I need is a single task from AutoWear. In the App section of the action type in the name of the app that you want to open (Authenticator) and add an IF statement (%aacomm = authenticator) if you think you will link more than one app in the future.

The task will respond to the AutoApp command “smartwatch”, and pass the “authenticator” as the command (%aacomm).

The Join Custom Commands can be super useful. It’s easy to set up, fast and extremely agile. You can connect it to NodeRED, Windows PC running EventGhost or ping the command back to Tasker.