It was much colder than I expected, but I’m from the north, and I promised myself that nothing would stop this adventure. It has been a while since I had time to play with the SM5 by Kumantech. It’s a shame really, as I loved my mini trip.

Tracks are best for rough terrain. SM5 by Kumantech comes with tracks, and I live close to a very peculiar hill. The day was slightly windy and wet. Clouds look like the rain would break any second which would be catastrophic to the small tracked buddy of mine.

“Sky” as I named it, did well. It started with attracting a lot of attention, as it was quite a sight to see. The hikers were turning the heads around wondering what is that monstrosity that I hold in my hand.

Armed with several cameras (forgot to fully charge the action cam) I tried to film the entire trip – which you can see in the video.

SM5 by Kumantech is not the fastest on the uphill, but fairly capable of traversing the rough terrain. I flipped the robot twice, but it landed on its tracks once returning the control to the rightful owner. 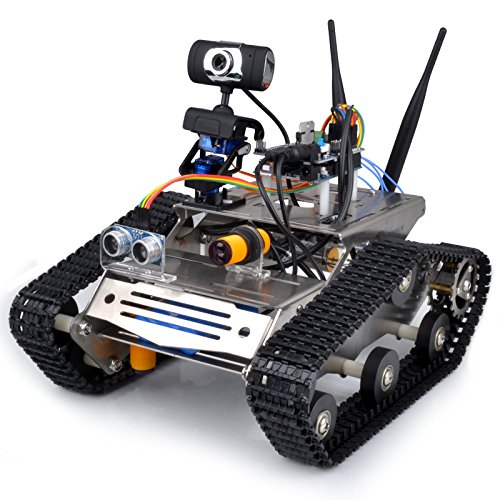 SM5 by Kumantech could use improvements

There is some room for improvements. The range was sufficient to carry the signal over 70m. As robot flipped I had to go and rescue it. The bracket on the backside prevents the robot from climbing steep angles but doesn’t save it from flipping over.

The engines while strong enough on the flat, are too weak to deal with extreme terrain. Adding the independent control to both tracks would improve the robot’s ability to handle really rough areas.

Overall I had a great time, and I will be working on the robot to improve it. There is enough space on the chassis to add a bigger battery, waterproof the design and maybe add a winch with a grapple. That would be cool! If you would like to get one of your own – use the links below, I get a small kickback from Amazon!