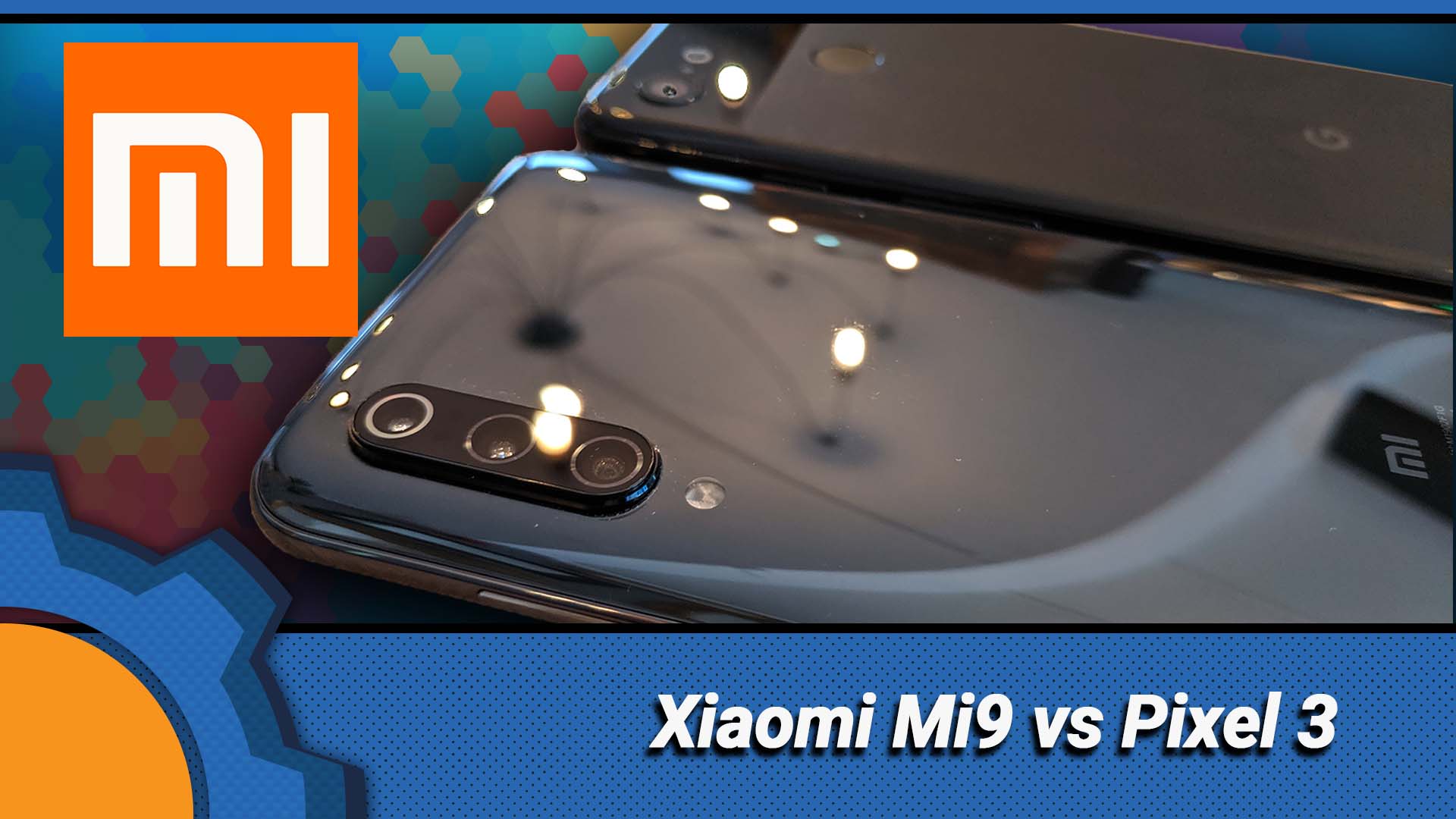 The ever-growing sensor resolution is impressive, but the number of pixels in the image is just one of the factors when it comes to taking that perfect selfie. In the past, I compared almost all Google Pixel phones together to see which one takes the best pictures (spoiler alert: its Pixel 3). Now I have Xiaomi Mi9 (review) to play with so it’s time to pitch the Google’s flagship: Pixel3 (my review here) against the new Xiaomi Mi9 (review soon) camera equipped with a 48MP sensor.

Xiaomi Mi9 comes with 3 cameras at the back of the phone and front-facing lens hidden in a small notch. The camera array contains the following lenses:

That’s a lot of options to pick from when taking the picture (unlike with Pixel 3) with the Mi9. Most of the time, when taking a picture with Xiaomi Mi9 camera, you will be using one of the cameras, however, the camera app comes with options which will utilise all back lenses to produce the final effect.

Pixel 3 has proven that with clever pixel processing you can get stunning looking pictures without an outlandish pixel count. This pleasure came with £699 at launch which is close to double what Xiaomi charges for the Mi9. Will the underdog with impressive 48MP resolution match the well-established picture quality of the Pixel series? Let’s find out.

All pictures and video files in much better resolution are included as a .zip file to download at the end of the article.

Heavily marketed by Google “Night Sight” mode, is taking advantage of long exposures and some clever image trickery (probably composite shots with different exposures). It was only a matter of time before other companies figure out, that best-looking pictures are taken at the low light level conditions.

I have to give it to Xiaomi, taking this picture was much quicker than with Google Pixel 3. Both phones produce a very similar effect, but upon closer inspection, Google Pixel 3 captures more detail when you close up. It’s not a clear win, as my pictures were taken using a tripod. In a real-life scenario, the longer you have to hold the phone, the more likely you will remove the details due to your hands shaking.

48MP mode captured a very similar amount of details to Pixel 3 without overexposing the frame. In reality, the light conditions were slightly darker than presented in the 48MP shot.

Thanks to some clever image processing, taking professional-looking (by this I mean images with a very shallow image dept) pictures is a breeze. Anyone can master “tapping the face” to help the algorithm do the job so I wanted to see how both phones handle a rather tricky shot.

If you wonder why am I standing in such a quicky pose, it’s to make the camera and processing “suffer”. The camera will look for face/focused object and based on the presets and other objects in proximity will try to pop the subject in question by artificially blurring anything that is considered the background. My hands go beyond the “face plane” in both directions to see how good is the processing behind the fake depth.

Looks like both cameras can process the image correctly leaving very little visible artefacts. The tonal differences are probably caused by how wide the shot is and the visible shadow in the Pixel shot.

No matter how much you hate the “reach of the arm” perspective, these pictures are here to stay. Pixel 3 comes with 2 ways you can take a selfie. You can use the “Portrait” mode with wide & extra-wide lens options or just fall back into the regular “Camera” without the fake depth of field effect. Xiaomi Mi9 comes with just one lens choice and Portrait” and “Camera” mode

The front-facing cameras on both phones struggle to compose the hand properly against the background. I’d say thanks to increased resolution (20MP) Xiaomi Mi9 Camera does this slightly better. It’s not perfect and you can see the errors in the close-ups. These are still minor issues as overall pictures well composed.

Let’s see what the main Pixel 3 camera and Xiaomi Mi9 is all about. Google’s phone comes with “Camera” settings and not much more to it, while on Xiaomi Mi9 you can use AI to pick the best settings for your picture or pick 48MP, Camera, Zoom x2 (optical) modes. There is a manual option too, but I will expand on that later.

Both Xiaomi Mi9 with AI and Pixel 3 handle the landscape in a very similar way. Xiaomi Mi9 without the AI leaves a slight yellow tint. I believe this would be a closer representation of the actual landscape. Processing the information about what’s on the picture (water) caused the white balance and colour palette to be shifted more towards blue. AI mode has recognised I was taken a picture of the water.

The 48MP shot is full of details, and it’s beyond match to “tiny” 12.2 MP sensor that comes with Google Pixel 3.

I also found a spider and a very nice moth basking in the light of a lamp so I decided to take the close-up shots through the window! These are hard to take at times as focus struggles to provide the correct reading. Both cameras handled the image well.

You can also see the difference between the normal picture and the “tele lens” with x2 optical zoom. The “tele” shot has been taken from the same distance so you can see the direct difference in the details captured.

If you want to get the maximum detail – you can always try the 48MP mode in Xiaomi Mi9 and crop the picture accordingly.

It’s worth noting that Xiaomi Mi9 Camera comes with 960 FPS slow-motion option! It’s a jaw-dropping number for a smartphone so I decided to run the slo-mo footage side by side.

Looking at the strange artefacts at 960FPS leads me to the conclusion that the mode is a composite of all cameras working together. You can see the blur around the spokes caused by image processing, which isn’t present at 120 and 240 modes.

Video and other functions

Here is the best video I could do with my Pixel 3. Note that the stutter is caused by the phone throttling down due to heat!

4K video in 60FPS is butter smooth and frankly speaking… AMAZING – I shot the footage indoors with the artificial lights and a massive window in the centre of the frame. The camera handled this very nice! Pixel 3 is only able to do 30FPS which feels like a let down considering the price.

Just be warned, I used DJI OSMO Mobile 2 for the image stabilisation.

I would like to touch more on additional functions available in Xiaomi Mi9 Camera. I’m talking about the PRO option. You are actually able to take over every camera parameter including:

These are not available in the standard Camera app that comes with Pixel phones. It will take time and practice to take advantage of these options, as working with manual mode requires a degree of photography knowledge but can produce really stunning effects!

If you want to take a look at all pictures in more less original quality (I used Photoshop to do the mashups and used the highest compression for JPEG files.) you can download it from the link as .zip file.

Which camera is better? Here is the problem I have: remove the price tag from both devices and I will favour technological marvel that is Google Pixel 3 and Camera app responsible for brilliant image processing. Having sensor this small producing comparable results to a camera with a 48MP sensor is incredible.

However, I’m sat here with 2 phones on my table and the one that in theory should be more expensive (Xiaomi Mi9 packing way much hardware for your money) is near half as cheap. Lacking hardware limitations of the Google Pixel 3, Xiaomi managed to produce a very decent camera without charging an arm and a leg for the experience. As much as I hate to say it, (I love my Pixel 3 to bits) Xiaomi takes the crown here for providing you with superb camera performance capable of outshining the Pixel 3 phone for a fraction of the price. If you have any comments or questions, visit this Reddit thread.