To say I’m stoked for my first printer, is an understatement. I’m an impatient person, and I had to wait for the Creality Ender 3 printer since November (due to various issues, the final shipping time was about 4 -5 weeks). The printer arrived yesterday, I dropped everything and escaped to the hackspace to run a livestream of me building it. There were 150 people watching me doing so and going through the first 5h test print on and off – thanks to every one of them for tuning in!

This is what everyone would consider a budget 3D printer. It will set you back at £150/$190 depending on weather conditions and current promotions. Inside the box, there is nothing that screams budget at you. The Creality Ender 3 3D Printer feels nothing but sturdy and well made. Don’t just take my word for it, it comes from someone that owns several more expensive printers already! 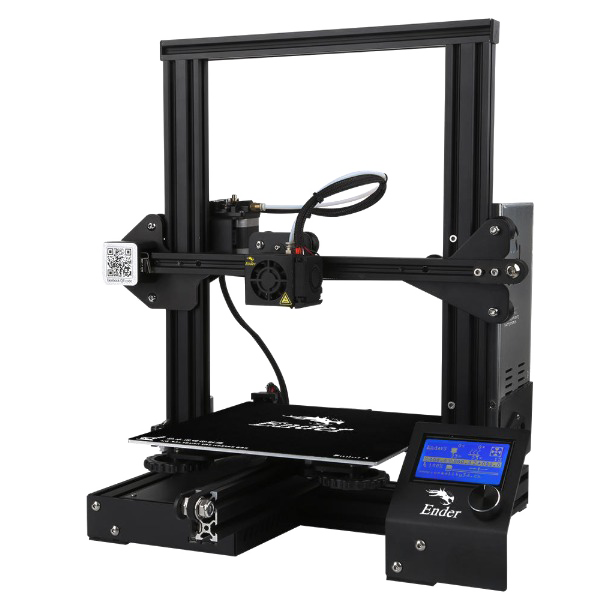 Frankly speaking, there was no better place to build a printer. I had the Teesside Hackspace to myself, then Jim (Hackspace CEO or like he rather call it “trustee”) popped in to oversee the operations, poke fun at me and give me heaps of advice leveling this thing out! But you know what?

You can totally build this on your own

I had no previous experience in assembling anything like that. The Creality Ender 3 3D Printer comes partially assembled, neatly packed bundled with IKEA style manual. If you reserve 2-3hours, you will be able to put it together yourself. There is no need to Hackspace as tools are included and if you read this piece, all the “Jim’s words of wisdom” will guide you through the levelling process and the first print.

When you embark on the journey like that, get enough space, space out all the parts and identify it. It’s super sismple once you are aware where everything is and where the parts are. Instructions are straight forward and apart from one step I never got confused.

The package contains all the tools you need, and these aren’t your tragic “I don’t want to use it” IKEA sets. A cheap but apt allen keys and wrenches will get you going in no time, without the feel that you need to dig out more professional sets.

The printer is made mostly of metal. It’s the biggest surprise, even the panel covering the display was made from a solid chunk of metal. Literally, the only plastic part was the reel axis (the holder’s arm is metal as well). Call me impressed. Cables has been also wrapped and partially managed, all you have to do is to add a zip tie here and there to finish it off.

During the entire build process, I had one thought – it doesn’t matter how it looks (ok it matters a little), as long as it prints ok. At this price point, I had serious concerns. I have had bad runs with the Hackspace printers, and these were sub $400-500 models.

The leveling assures that at no point the printhead nozzle is too far away from the print bed. Incorrect spacing can lead to failed prints. Take your time and follow this simple guidance.

Follow these steps and you should have no problems with your 1st print.

My test print lasted 5h. It was a test g-code included with the printer. I have not modified any settings at all. Just put the file in and run it off the microSD card. I’d assume these were the default settings. Plenty of space to fine tune it.

The print bed temperature has been consistant across the surface (measured with an infrared thermometer) and none of the components were warm during the 5h print. The power supply, connectors and the motor driver enclosures reported back near room like temperatures.

I run out of the filament before the test print could be completed. While the firmware version has no options to change the filament mid-print, I was able to pause the print, preheat the extruder and complete the filament change. As you can see on the picture, the print has resumed flawlessly with the new filament.

The print was excellent for how much the printer costs. The printer was moving quickly between parts, the Endie (aptly named by me test dog figure) had overhang edges, support material and curves. Plenty of surfaces to examine the quality of the print.

It’s much easier to work with, with better print qualities

Both I and Jim were VERY impressed by what this printer is capable of. Just take a look for yourself.

Creality Ender 3 3D Printer comes with a low price, that often can seem as too good to be true. This was my line of thinking after bumping into quality issues with more expensive and featured models. It may not have dual extrusion, automatic bed levelling and other fancy features, but it runs quietly and offers what every entry-level product should: ease of use. It’s a great machine to get you started, to have as a 2nd printer or keep you going until you figure out your upgrade path. It’s here to stay for sure. Join the discussion on Reddit.