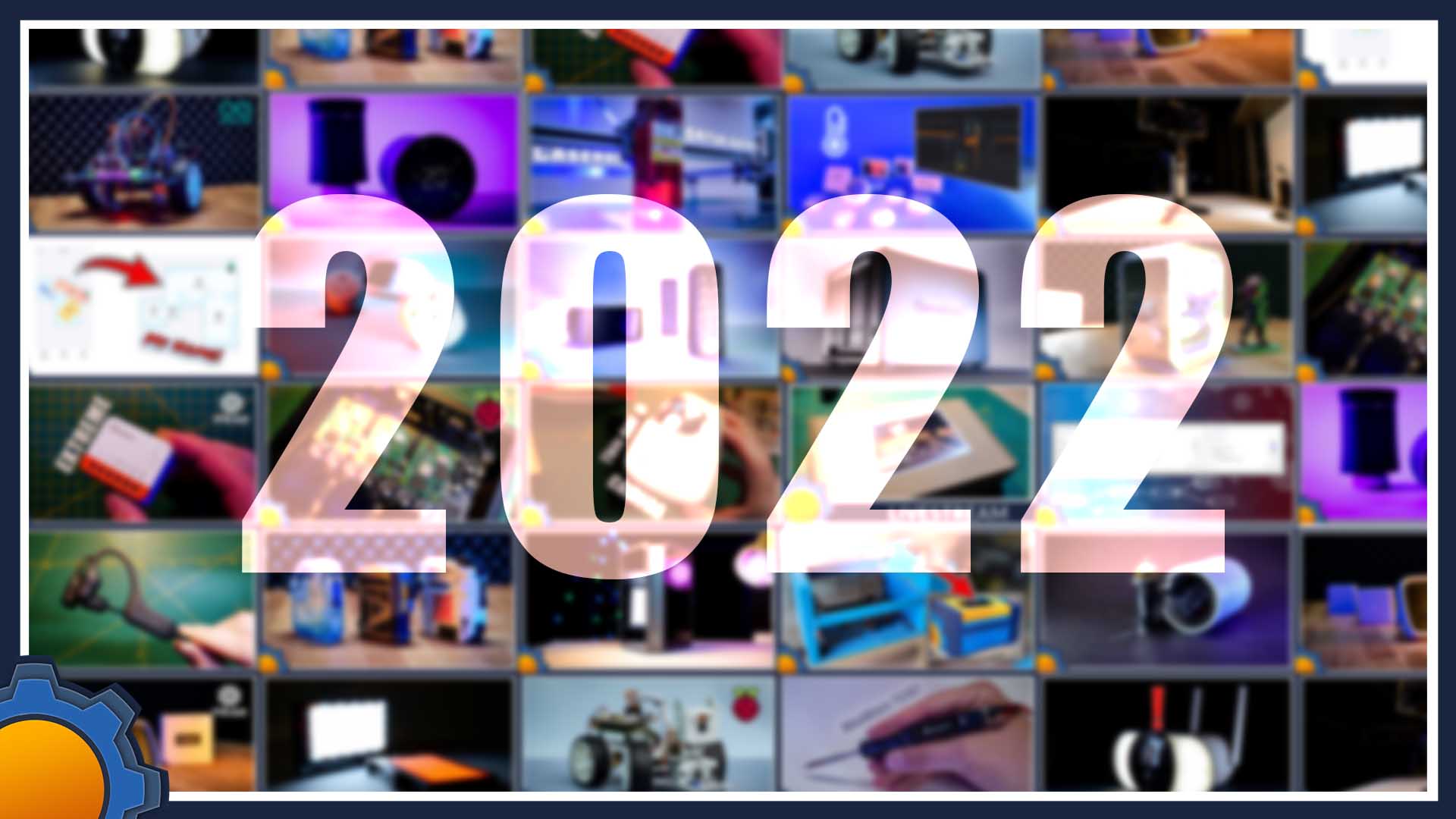 What a year it has been! I share my time between my professional, full-time career as a Robotics Technician and whatever I should call myself for running NotEnoughTech. I’d like to keep calling it a hobby, but I think I lost the privilege of calling it that about 2 years ago. Let’s look back at 2022 and see what happened, where I am now and what 2023 will likely bring.

Difficulties and decline in articles

You’ll notice that number of posts per month has dropped significantly. Since May 2021 I have been battling significant back problems that restricted my ability to move, spend time at the desk and frankly speaking enjoy my life to the full. I didn’t speak about it much, but constant pain has led to a less creative mindset and a prolific feeling of tiredness.

Before my injury, I could spend my day at work, come back home, chill a little bit, make dinner and still have the energy to work on a project or two and make a video or 3 a week. After the injury, I found myself needing 2-3 hours of sleep after work just to be able to function. This significantly cut into my NotEnoughTech time and what’s worse it made it difficult to make video content as times were I was full of energy and cheerful were very rare.

Light in the tunnel

I underwent a small surgery to rectify the problem and remove the chronic pain a few weeks ago, and I’m super happy to share that I’m no longer in pain. Time will tell how permanent the treatment is, but I take it one day at a time. I’m slowly getting back to my more productive routine. It takes a while to unlearn 18 months of bad habits developed during my period of illness.

Despite being a national of two countries, I found myself stranded inside the UK due to expired travel documents and lengthy issuing queues. Infamous COVID-19, insanity at airports once borders opened, and lack of passports kept me mostly at home. However, even back pain didn’t stop me from attendance at EMF2022 and more private FootFest22.

Imagine a couple of thousands of makers, creators, YouTube personalities and visitors camping in a big empty field with high-speed WiFi, power and all the time in the world to showcase their makes and projects. That’s EMF and it was simply awesome. I took it upon myself to record a lot, and talk to as many people as I could – all in an attempt to make a short documentary of my visit. Each day, I’d be on my feet wandering around with my new camera and gimbal (purchased specifically for the event – I had an entire pandemic to save up, as the last event got postponed due to Covid) trying to get a glimpse of how awesome the event is. Each day I would pay the price of doing so, as carrying relatively heavy equipment for 8-10h straight was definitely against the doctor’s orders.

I met and talk to people making giant robots, communicating with International Space Station, designing light shows or leading soldering workshops. 4 days of absolute paradise for anyone who is into that kind of stuff.

I know some of you that follow me await for the footage to be released, but due to my health and other commitments, the EMF22 video is on the back burner. I had a strong commitment to tackling some of the edits during my Xmas break – but an inflamed root canal put an end to that plan as well. The whole of my festive time I spent managing pain, and hoping for an emergency visit to the dentist (spoiler alert, I’m not sure how much content I’ll release over the first half of January, as I have more health-related treatment in the first 2 weeks of the New Year.

Originating as a small gathering in lieu of the cancelled EMF2020, a bunch of makers (myself included) got an invite for a private instance of EMF with equally awesome people, scenery and the same running theme. The last FF21 happened in November, where we would camp in near 0℃ temperatures, this year’s event went in the opposite direction and happened during a heatwave with near 40℃ heat.

Despite the nightmarish sunshine, we all had great fun – and as the event was smaller in scope I made a short video about my stay there – it should give you a taste of what was it like.

There was plenty of food, even more drinks, hacky racers, talks about everything and anything and star gazing. Late evening shenanigans led to the spontaneous production of an action-packed short called BANG! The story of violence, betrayal and teachings why you should make movies with plenty of light ahead of you!

Speaking of events, I invested a bit of money into a new camera, gimbal, motorised slider and a new laptop with editing capabilities. You can probably tell that my video quality has improved a lot throughout the year. I’m still learning how to use these assets to their full potential, so expect experiments.

I also acquired a big laser cutter as a project. It’s one of the things I had to put on hold as my back was preventing me from doing more work on it. Something I’m looking forward to resuming soon. Here is a short recap:

This year, I also started to work with Element14 (Farnell) as one of the video content presenters. It’s nice and more creative than me bunch – so they set the bar high! I hope that my projects made for them will meet their expectations. I have to say, that working “for someone” even when I get to retain almost all creative freedoms is much more stress-inducing than making videos for myself, even if I know for a fact that I’m a strict boss than my handler is. I’m 100% enjoying it and you can see this in my first video made for Element14:

In 2022 I wrote 97 posts which were viewed just over a million times. For a small website like mine, with relatively niche topics – I can assure you that reading is not dead. My top 3 posts were:

However none of these posts was “viral” – they gradually amounted to the best-performing pages with the lowest bounce rates. It means that readers appreciated the information and found it useful. The most viral post was the one about the firmware update to Sonoff Dongle – a follow-up from the rather harsh take on the initial release of the ITEADs coordinator.

Overall, I have seen fewer viral spikes but I can observe the increase in daily readership, which is the main metric I’m interested in. I’m happy with the website’s performance, considering my limited capacity to write.

Over the course of the year, I went from 24k subs to 32800 people following me on YouTube. It’s not the most impressive growth as far as YouTube is concerned but I’m personally pleased with it. Perhaps I should really start saying “share like subscribe” mantra in each video?

However, the channel attracted over 1.5mln views and that’s mind-blowing for me. I guess I have enough videos out there to make every single view count. My videos have an almost 5.3% click-through rate with very low figures when it comes to returning new viewers. It’s probably a predictable metric that coincides with review videos that once seen, satisfy the viewer’s questions.

Big shout out to 4% of women that watch my channel who are likely in the 25-44 age bracket.

And probably the most burning question you have about the channel – how much a YouTuber like me made in ads revenue in 2022? Just shy of £3000. Enough to cover the camera upgrade and gimbal purchased for the EMF with some change left to pay for the web hosting of NotEnoughTech.

Other than editing EMF22 footage, working on my laser cutter and cooperating with Element14, my plans include a new NodeRED series for beginners (it’s time as things have changed significantly and I had nothing but great feedback from the original series), completing my DIY smart heating system which has been marred by postal delays, leaking radiators and inability to book plumbers.

I hope you have awesome plans for the New Year as well. So let’s see each other soon!