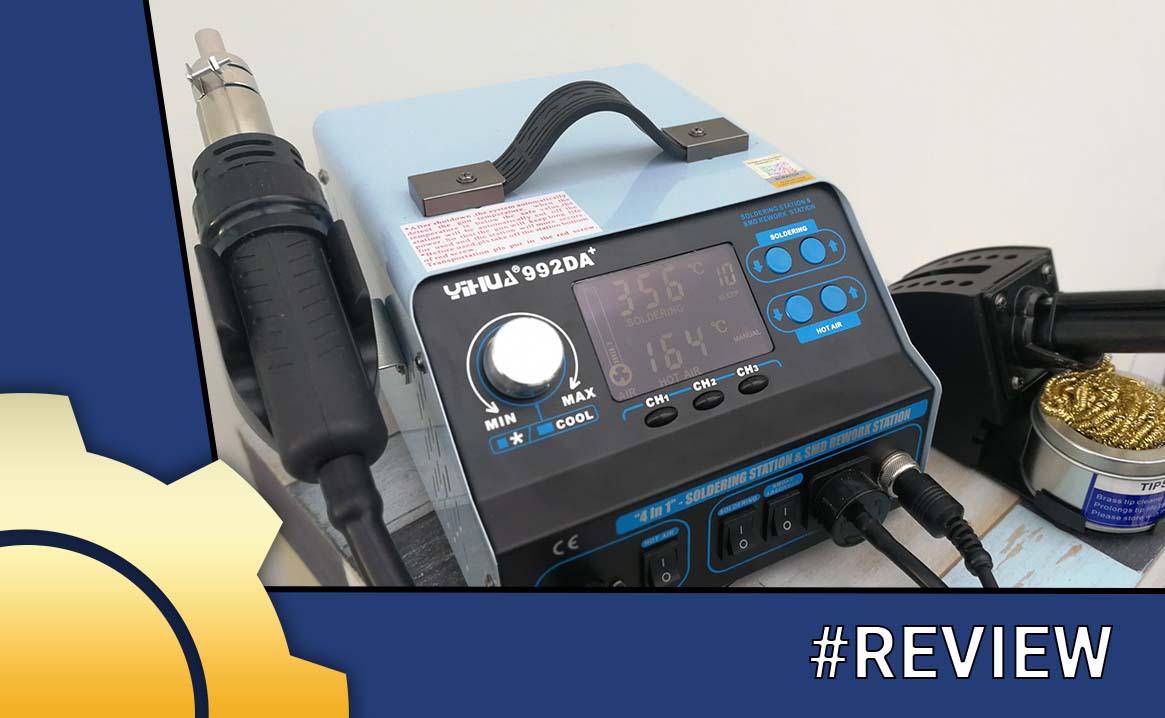 A technological upgrade worth of Iron-Man

In December, I treated myself to a serious upgrade. Frankly speaking, I wasn’t planning on forking out that much money on a soldering iron, not to mention an entire station, but one thing led to another, and I ended up with YIHUA 992DA+. I also have to say, if it wasn’t for an excellent refund policy that comes with Amazon, I’d probably hesitate more before a purchase like this. What can I say, it’s a huge step up from a 40W hobbyist iron supplemented by a USB 8W portable mini soldering iron.  I hope my review will help you make the right choice.

For the past 3 months, I spent several hours with the YIHUA 992DA+ station, and I feel confident I can pass a fairly objective judgement by now. The brand is fairly unknown to me, therefore this purchase was a deep dive into the world of professionally looking, but not breaking your wallet completely, tools.

Watch the unboxing, to see a box that keeps on giving. Apart from the soldering station, you get a fair bunch of extras. Apart from spare tips for both, the heat gun and the iron, you get some solder, cleaning stuff and also spare heating elements for your soldering iron and the heat gun itself. I just really hope this is done to provide the added value, rather than to combat returns. Either way, it gives me that extra assurance, should anything bad happened.

This thing is fast! You may not be as impressed as me, but before YIHUA 992DA+ to get my old iron hot – it took minutes. It’s great to have a soldering iron that heats up within seconds. It takes about 10 seconds to get to 340°C which is amazing! It speeds up the workflow a lot. I use this beast even for smallest jobs, as it takes moments to get something fixed.

The soldering iron comes with a base to rest and clean the iron. The cable is very flexible and long. It’s made of really nice rubber that will stay where you put it. There are 10 spare tips which should cover most of the use cases.

The work with YIHUA 992DA+ iron is fast and comfortable. I keep the fume extractor (you can adjust how far it reaches) at about 30% of the airflow. This keeps the unit quiet (quiet enough to solder at night when others are in bed) while dealing with the deadly fumes!

I have to say, that soldering turned from a chore into a fun activity, as powerful iron took the frustration out of the task.

So far, the use cases involved treating heat shrink tubing, de-soldering an IC and fixing a broken lipstick (sic!). The gun is easy to use, the kit comes with 5 nozzles.  The rubberised hose is a bit thick, but that’s OK, heat guns don’t need the same level of precision as soldering irons. Prepare to crank up the airflow and create some noise though, especially if you are dealing with big ICs.

The gun has a cool down procedure, so don’t be surprised to see it blowing the air while the hot gun functions are off. It does this to cool the nozzle down to the safe levels.

The YIHUA 992DA+ has a clean and easy to read interface. Extra functions include temperature compensation (if you are working in cold or hot environment) °C and °F support and 3 programmable buttons to store the temperature, sleep and offset settings for both soldering iron and heat gun.

Cranking up the airflow of the heat gun or the fumes extractor will also increase the noise level significantly. The most case uses won’t require you to do so, but it’s something to bear in mind. There are 2 screws at the bottom which hold the pump in place for transport. Thanks to one of my readers for pointing this out. There is a warning about it on the sticker, but I’m me, and I only read the 1st half of the sticker! I bumped the review score to reflect the changes. The unit no longer vibrates, and it is less noisy!

I’m really pleased with the YIHUA 992DA+. Coming from a simple soldering iron, it makes a huge difference in my workflow. It’s an expensive upgrade if you don’t do much soldering, but if you planning on bigger jobs in the future, I don’t think you will regret that decision. If you want to support me, links below give me a small kickback when making your purchases.

0
Are you looking to spruce up your photography studio? These battery operated panels might be what you need. Meet Pixel G1S
In December, I treated myself to a serious upgrade. Frankly speaking, I wasn't planning on forking out that much money on a soldering iron, not to mention an entire station, but one thing led to another, and I ended up with YIHUA 992DA+. I...A serious upgrade! YIHUA 992DA+review