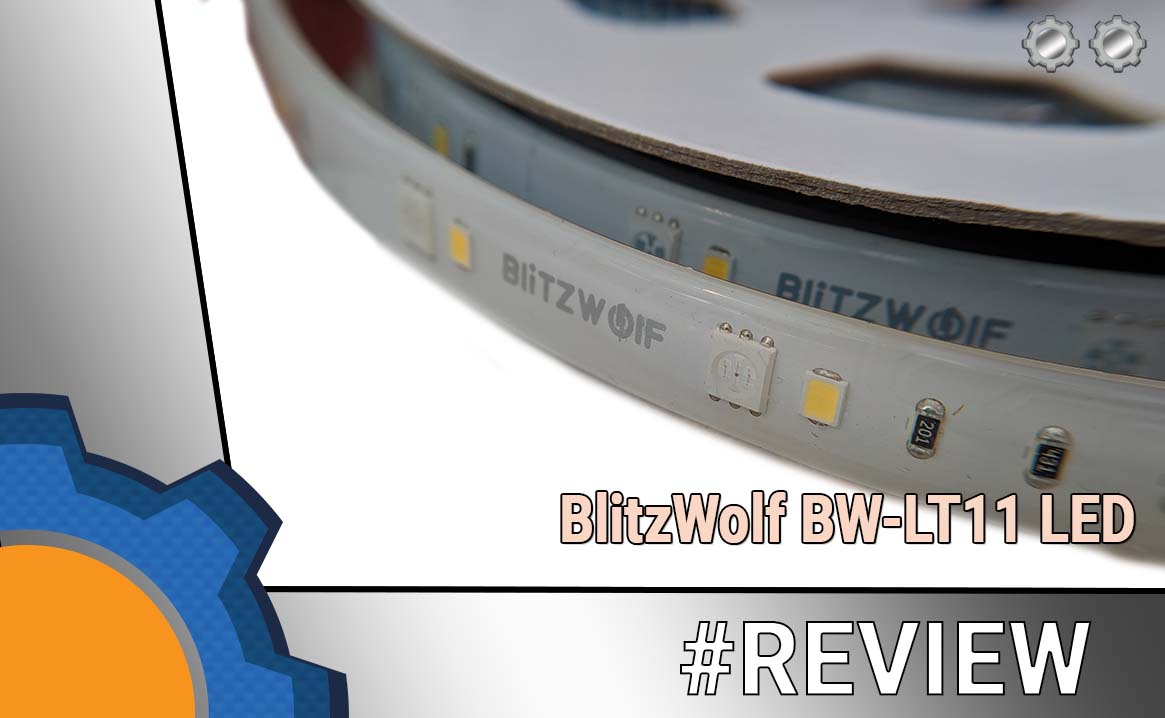 BlitzWolf is actually home brand of banggood.com. It’s something I have learned not so long ago. For a while now, I had plans to add some LED strips above the kitchen top so I finally settled for the BlitzWolf BW-LT11 LED light strip.

First of all, these are not individually addressable LED’s. That’s fine, I’m not going to do anything fancy, I really just need a white strong beam with a colour option if I feel particularly fancy.

The BlitzWolf BW-LT11 LED light strip comes with 2 sets of LEDs there is a separate white channel (something I already destroyed by tinkering with the board – it’s fixed and the write up with modding these is coming) and the RGB LEDs that provide you with colour.

This means the white beam is much brighter. This is ideal for the worktop solution. To top that, the strip comes with Alexa and Google Home integration, so it will blend nicely with my Yeelights in the ceiling.

Lights are powered by 12V supply and there is plenty of cable from the power supply, to a physical switch and from that switch to the LEDs to cover pretty much every scenario.

I’m not sure what’s going on, but I’m not able to set the strips back to white using Alexa’s voice command: “Alexa, set kitchen to white”. I can set other colours without any problems but white is not working.

This get’s “better”, I can set the light to white using Alexa app on my phone. The LEDs turn white, but on the next update, the Alexa app reports “Mint Cream” colour set. Asking Alexa to set the Mint Cream – sets the colour of LEDs to… yes Mint Cream instead.

After some testing (and creating a separate group for the worktop lights aptly named “worktop”) I discovered, that the issue is caused by having Yeelights in the same group. I guess the colour palette differs between the devices, and Alexa (and Google Assistant) struggle to pass the correct value.

For now, I created Alexa routine “reset lights” where I manually set each device to the white colour. I also assigned the worktop lights to a separate group to have the full-colour control over it. It’s not ideal but it’s the only solution I came up with. The same probably can be done in Google Assistant.

I love the BlitzWolf BW-LT11 LED light strip colour reproduction. The white in a separate channel provides a strong beam while the colours of the RGB LEDs compliment my Yeelighs perfectly.

The app is ok. I don’t see myself opening the app and playing with the lights each time. I rather use a quick voice command. But if you want to explore the app more, it comes with the separate tab for the white LED and the RGB ones.

The BlitzWolf BW-LT11 LED light strip comes with a physical button, which is nice, but slightly pointless. Instead of turning the current preset on and off, it cycles through a couple of colour presets instead. The former option would be more practical.

The associated app is alright. There is an integration with Alexa and Google Assistant so you won’t be using that app much, but in a pinch, you can set your brightness, colours and scenes.

One of the fancy features is to listen to the music and apply the colours based on the sounds around it. It’s cool, but I won’t keep my phone on just for that.

Because the BlitzWolf app is a part of a bigger ecosystem, it comes with an automation tab. You can compose your own intricate flows which would include setting lights according to the weather conditions, lights or weather!

It’s possible to set BlitzWolf BW-LT11 LED light strip red at 7 am if there is a snow forecast in a city of your choice. In all honesty, this is actually very cool. I wish you could do this with traffic API. Something to consider I guess! Maybe a project for my home automation?

The BlitzWolf BW-LT11 LED light strip offers pretty good experience especially considering the price ($24.99 5M LED Strip). The finish of the components may reflect the budget price point, but in all honesty, you want to mount the strip in a place when you cannot actually see any of it, so that’s fine.

Since I opened it up, I know that the strip is hackable, and this is something I will be doing next. I will consider NodeRED integration and adding motion sensors to the setup. For now, I’m running it as is! Got words to exchange? Use this Reddit thread!

0
Are you looking to spruce up your photography studio? These battery operated panels might be what you need. Meet Pixel G1S
BlitzWolf is actually home brand of banggood.com. It's something I have learned not so long ago. For a while now, I had plans to add some LED strips above the kitchen top so I finally settled for the BlitzWolf BW-LT11 LED light strip...."Mint Colour"? - BlitzWolf BW-LT11 LED light strip