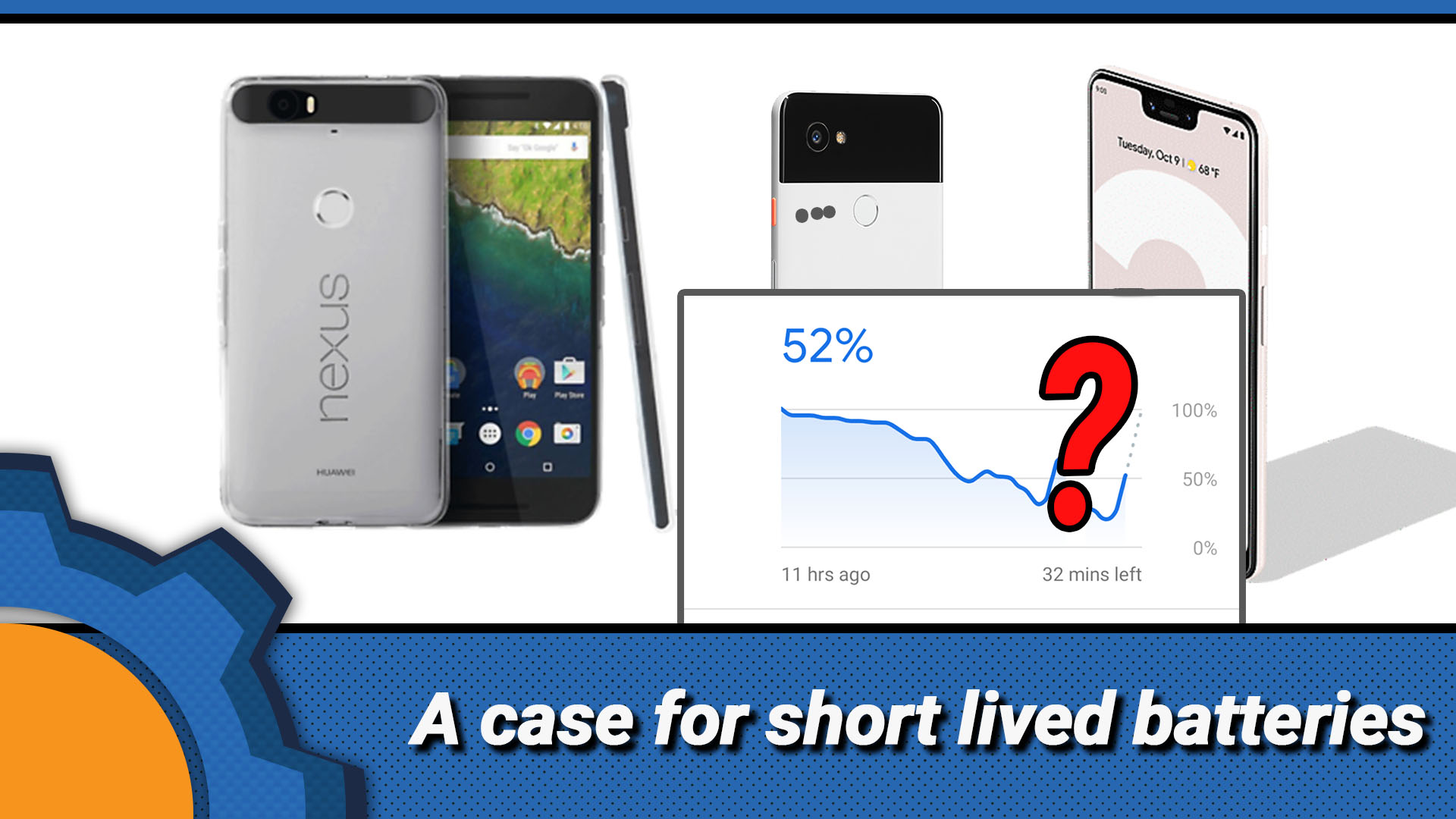 You would expect much better battery performance from a £600+ phone

I started to wonder, how long is the battery’s life expectancy. Before Google’s phones were considered “premium” I upgraded my phones every year, as new releases were in my “affordable” bracket. Now, the phone cycle is set by the price and the contract length, and more often than not the battery performance.

I got my brand new Nexus 6P with a 24-month contract. Nexus 4 was sold after a year, and Nexus 5 got water damage around that time too. The new headset had to last me 2 years, as otherwise, I would not be able to simply just buy another phone. It’s fair to say that the early demise of my Nexus 5 made me look after the phone more.

The phone (Nexus 6P) indeed “lasted” almost 2 years. The last couple of months the battery has been plagued by the poor performance which actually affected (and pissed off) enough people to trigger massive RMA. You can read about the details of this ordeal here. TL;DR: I got my phone fixed. Annoyed enough I flogged it on Gumtree and moved on.

My next phone was (is as I still have it) the first Pixel. The phone came as a part of quite an expensive contract with 24 months to go. I’m actually finishing this contract in Feb. The phone started to show all the signs of the broken battery a couple of months ago. Where I reported a first battery failure after a year of use. Sadly, my claims were dismissed by Reddit users. I should have trusted my gut and start the RMA process then. I would save myself a lot of hassle.

Summer came and since I was more aware of the problem, I always had this massive battery bank with me charging my headset around 30-40% level. Then the Autumn came, and despite the UK’s mild climate, the phone was barely usable at 50% charge. It would simply shut down at 50% and show 25-30% after a reboot – all that in temperatures of 10°C (50°F).

In November, I decided to actually get a new phone – Pixel 3, since I could not rely on my phone in any outdoor conditions. I know you would be tempted to say that not looking after the battery would cause the battery to lose its charge and capacity, but that simply wasn’t the case.  I own LG Urbane watch, (got it in July 2015) and wear it since. At first, the battery lasted about 2 days on a single charge and the battery after 4 years still lasts me 2 days. The watch is mostly uncovered and exposed to all weather conditions, unlike the phone which sits comfortably in my pockets.

As a consumer, paying for a sealed phone with a -non-replaceable (not in a traditional way) battery in the excess of £600, I would expect the device to perform for more than just one year. At the end of life of Pixel (1st gen) the phone is worth about £120 on Gumtree, and to make the headset floggable, I’d have to invest about further £60 in a new battery. I don’t think that’s a deal I’m willing to make. I rather keep a spare phone as an emergency.

0
It's the second camera from SwitchBot, this time with 360 degrees of movement, tracking and more. Check out the full review of SwitchBot Camera PT