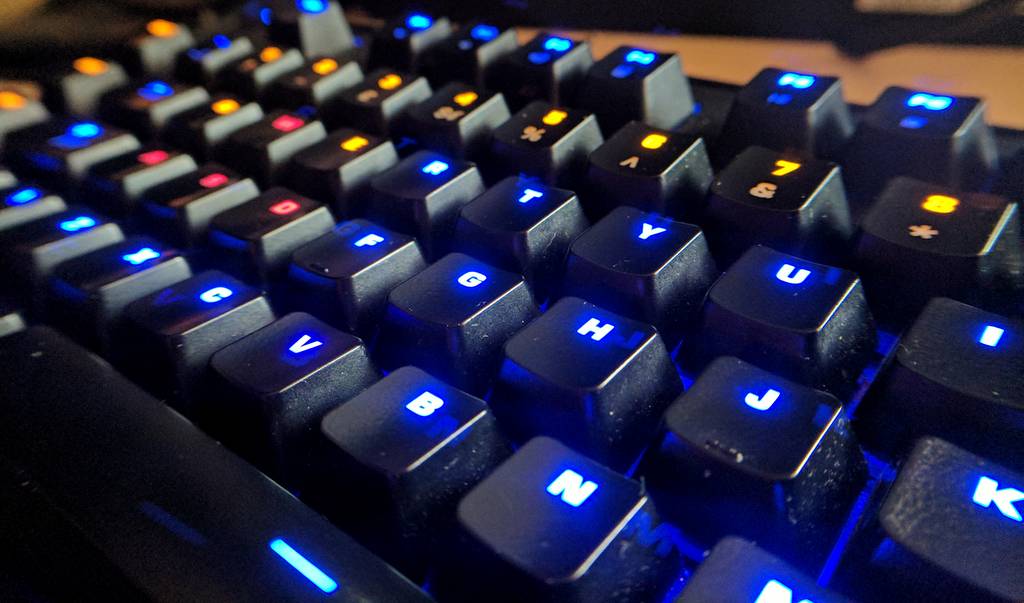 Put a new life into a keyboard.

My Roccat Ryos MK Pro  Keyboard started to fail. It has been a few good years to the keyboard is no longer covered by the warranty. A total of 11 LEDs lost their illumination, and while the keyboard remains totally usable, missing LEDs are a bane to my OCD.  Roccat’s new devices sporting full RGB highlight, but I just don’t have that kind of money. It was time fo fix things up and do the Roccat Ryos MK Pro – Keyboard Mod.

I have contacted the Roccat’s customer support which has provided me with the LED specification. I wanted to make sure the LEDs I get are compatible. Fortunately, the keyboard punches enough power to power up all the colours, not only the blue LEDs.

I have ordered a pack of 3mm LEDs off Aliexpress and 3 weeks later a packet has landed on my doorstep. I paid about $5 for a selection of 4 colours. The plan was to replace the broken LEDs and create light zones.

The process was fairly straightforward. A few extra screws are located under the sticker and the rubber pads. Once the keyboard is open you can start the Roccat Ryos MK Pro – Keyboard Mod.

Disconnect the thumb keys and unscrew the additional screws keeping the keyboard attached to the case. Be careful of the cable connecting the keyboard to the controller. To do the Roccat Ryos MK Pro – Keyboard Mod you will need a soldering set. A solder sucker is a very handy tool. It costs next to nothing and it made all the difference!

Before you start taking things apart, take the picture of the keyboard. It will be your backup plan if you forget what caps goes where. You are almost ready to start.

Draw a plan. My plan was:

Once you have a layout sorted (Less is better unless you want your keyboard to double as a tree for Christmas) you can start with the unsoldering. My advice is to do this colour by colour.  This way you won’t get confused.

Locate the LED’s pins. They are placed above the switch. To use a solder sucker to remove the solder from the board. Once the excess of solder has been removed, heat up both pins at the same time while pushing it down with a flat screwdriver. When the pins go through the board, use the screwdriver to push them out from the other side.

Push the LEDs in and bend the excess pins in random directions. The LED will stay in place. Don’t solder until you get all of them done this way. It will speed things out. Use a little solder to get the pins secured. Make sure there are no shorts. Test the keyboard every few moments. It will save you from making mistakes.

Once all the LED’s are soldered onto the board, use clippers to trim the pins.  All you need to do to put all things together is to reverse the opening-up process. Once you are done you can enjoy an extremely nice Roccat Ryos MK Pro – Keyboard Mod.

Mechanical keyboards can last for years if properly looked after. Roccat Ryos MK Pro had been with me for 8 years now (and I bought it as a refurbished one off Amazon) and it looks like the keyboard isn’t going anywhere. If your keyboard suffers from a highlight failure, you can easily fix it on a budget adding a bit of RGB flair to your old keyboard. If you have any questions, let me know in this Reddit thread.

Mat Zolnierczyk - 13/01/2022
0
What's the best ZigBee temperature sensor money can buy? Let's test all of them and find out
Read more

Is Sonoff Zigbee Dongle Plus finally ready for launch?

Mat Zolnierczyk - 03/01/2022
0
As my DIY Smart Heating expands, I need to address the biggest issue: lack of wall mounted thermostat. Is this ZigBee thermostat one you should get?
Read more